Walter is doing so well in foster care! He has come out of his shell, and is so happy all the time. He went to his first patio party at Riverbank Bar to benefit CAWS and loved the attention. Though his neuter became infected and required another surgery, he’s been so grateful through it all. He had his first heart worm injection this past week, and while the first day was really hard, he has bounced back. He just loves to snuggle on the bed, couch, patio, wherever he can. And he really loves car rides. His skin has improved, but it’s still a work in progress. He’s been so good at the vet, and he’s got quite the fan club these days. He’s truly a gem, and a joy to foster. We can’t thank all of his supporters enough for helping him on his journey to good health. 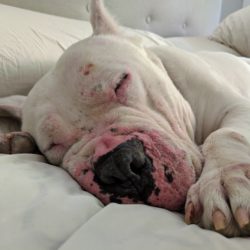 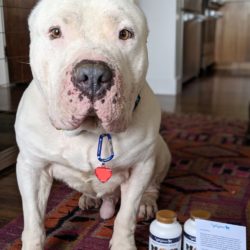 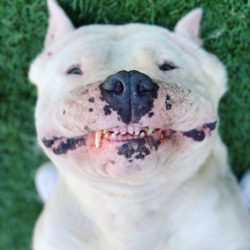 Walter Bear was rescued from the hardworking shelter Animal Services Center of the Mesilla Valley in Las Cruces, NM. They are often at or over capacity with large dogs, and many dogs are heart worm positive.

Walter Bear caught the eye of the staff both at the shelter, and beyond. It was clear this big boy had likely lived a life of neglect in a yard. With his giant head, and even bigger heart, a rescue plan was set in motion. Within hours, shelters that were in Idaho mentioned a Dog is My Copilot flight that was leaving the very next day from the same area – if there was space, they could squeeze this polar bear on the plane, since the pilot had to refuel in Salt Lake City anyways.

At 5 am, one of the shelter staff in NM brought him to the airport, and off he went. When it was time to get him off the plane, he literally lept into his foster mom’s arms – all 90 lbs of him!

Walter Bear seems grateful to be in a home. He stood calmly for his bath and brushing, seemingly enjoying the attention. He’s a bit shy and shut down, but he will slowly amble up for attention.

Now it’s time to be a part of his transformation. His heart worm treatment will be costly, he is need of a neuter, and some TLC for skin issues.

You can help with this gentle giant’s care and be a part of his story by donating to CAWS in his name. Thank you for all you do to support these journeys, we can’t do this without you! 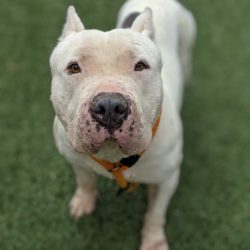 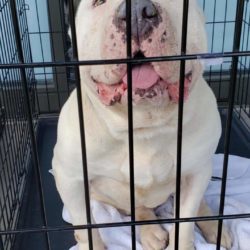 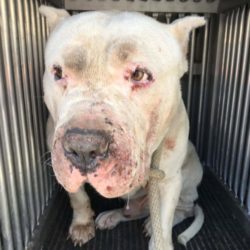 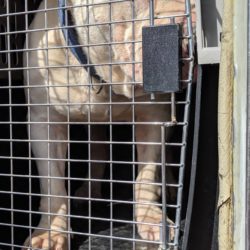 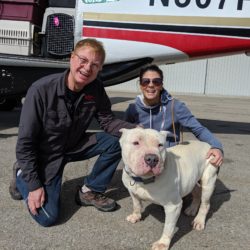 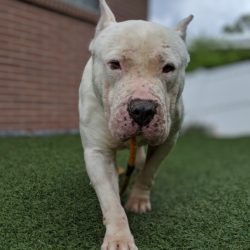