Sweet Zai had been used as a backyard breeder’s income for years, producing thousands of dollars in “doodle” puppies. When she developed mastitis, the breeder refused her basic medical care. Her teat became so infected, it ruptured. The breeder gave her 4 doses of 7.5mg Lortab (a pain-relieving opiate for humans) to enable her to continue nursing her puppies from her necrotic teats. The breeder intended to have this beautiful dog euthanized once the puppies were weaned. The breeder’s brother saw Zai’s abhorrent condition and rushed her to the vets. The cost to save her was more money than he had, so he called Animal Control for help. This started the ball rolling for an owner-surrender, and when asked, CAWS didn’t hesitate to bring Zai into our program. For days, we weren’t sure if this pup was going to survive. She was extremely critical and under 24-hour surveillance at the hospital as a result of the Lortab overdose and her raging infection. We couldn’t do surgery to remove the dead flesh (as a result of her untreated infection) until she was stable. After a week, Zai improved enough to have surgery. Finally, all septic tissue was removed and her stomach was stitched closed. Shortly thereafter, Zai went into a foster home to recover. She now has had her stitches removed, received her first groom, and will be spayed this coming week! It also appears Zai has found her forever family and will be adopted after her spay! CAWS spent over $7,000 to save this girl and we couldn’t have done it without our amazing donors! 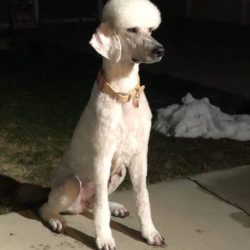 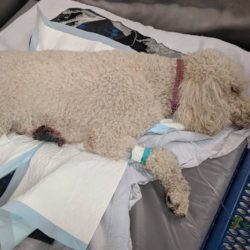 Cairo and Her Six Puppies